Well the mites are back and I’m single, so that must mean one thing – time to revisit ye old blog.

Hello, my name is Meg, I’m about "1 hot toddy, and two refills of a coffee mug of straight bourbon" in on this glorious Sunday eve. I’ve been using the day as a string of distractions to not continue binging YOU– a show to which I am very late, and also just want a stalker to be my boyfriend because at least they are interested in me. Also helps if you’re Penn Badgley though. Ugly stalkers need not apply.

It has been two years since I “started” this blog (read: wrote a few times and then got a new job and back together with the ex, rendering me no time or motivation to do anything for myself).… or in the words of my friend and former roommate Bear Sharktopus: “What happened to the unshaven legs thing? I was looking forward to reading about you. You probably started getting dick huh? That’s my guess.”

I wanted to write back, AND A JOB. But he’s not wrong.

Also. Surprise! Now I have neither, but I do have a blog. So.

Lagniappe: This roommate also still owes me a box of Franzia because we had a bet about which one of us would have sex on our roof first. Ah, New Orleans.

So let’s check in in shall we.

It is 39 days until my 35th birthday. I've had sex with 50 guys, according to the list titled "Brahs" on my cracked iPhone XR  (margin of error still +3) that I didn't even bother consulting. Yes. Only +1 more in the past few years which is both shocking and … (I just let out a big sigh deciding what word should go here to describe it, so I’ll say dealer’s choice. Choose your own judgey adjective!) “Is it growth or is it a pandemic?” Either way, that’s why they invented Bourbon and Cats and YOU amiright?

Ok. I still claim 5’9” and a half, but also am claiming about 12 more pounds around the middle. I never got into that “Quarantine Work out” challenge, or routine, or really “going outside my house anymore.” I’m up to 20mg of generic Prozac daily!! Progress. And let’s throw in 27MG of extended release Ritalin after a new diagnosis of ADHD. It has been a PROCESS to be diagnosed and come to terms with ADHD as an “adult” “woman,” and included many hours of cognitive testing which showed I’m in the 98% and 99% of intelligence (hair flip) and only about 50% for memory and processing speed (reverse hair flip). Which is why I’m a great secret keeper and can’t listen to audiobooks. I’m sure I will harp on about all of this in another post so stay tuned!

I have 2 "foster" kittens that my roommate and I have had for over 6 months. We can't tell the foster people we want to adopt them yet because we can't afford their vet bills. I spoon them 7 nights a week, despite the fact I am allergic and they have infested our apartment with mites.

We’ve adopted the cats! Hooray!... like 1.5 years ago. In the past year we’ve spent AN ABSURD amount money on them because one has GI issues, and one has UT issues (hello girlfriend!) and I’m 99% sure they are responsible for the THREE mites that I picked off my body today but hey. They’re both sleeping on my bed right now and that means I will save on my heating bill tonight. Harold still makes me spoon him multiple nights a week, usually around 3-4am meaning it disrupts my REM cycle, so parents I know EXACTLY what you’re going through right now.... I started getting allergy shots which don’t seem to make ANY difference, but my insurance covers it right now so fucking shoot me up. As noted they have yet again infested our apartment with mites, and also they are fucking serial killers leaving mice with half eaten faces in the hallways or just toying with them mercilessly, but I love them just the same.

Who wants to hear more about my cats?

I graduated high school at 17, graduated college at 21 with a 3.75 GPA, highest in the Poli Sci department.

I just sent in my application for Grad school 4 days ago, and MAN I could not have planned this recap timing any better if I had not just been drunk and felt like writing. I submitted 2 minutes before the deadline, and it felt just like old times….

I’ve been in the film industry 11 years. - 1 in Austin, 5 in New Orleans, 5 in LA. That. Is fucking CRAZY. I didn’t think I’d last a year in LA. My last assistant job I made $25/hr, but they made me sign a “no quote” deal so that I could never use it as proof to get them to pay me that much ever again. HA! So many, SO MANY thoughts on this, again, for another post, or tell-all book deal, or a tweet when I learn how to use twitter. PS this company who MADE AN ASSISTANT sign a no quote just raked in $14.71 billion last quarter in the middle of A PANDEMIC. I digress. I’m currently unemployed, but aren’t we all? Sorry. Freelance. I’m currently Freelance. In case anyone wants to pay me to write or spellcheck for them ($150 bucks a pop, it’s a steal, I promise).

The last two jobs I was paid for (that is key in this business unfortunately) were NOT as an assistant and people defaulted to my decisions and valued my opinion, and I’m not sure there is any going back.

Except that I just sent my resume to two assistant jobs this morning cuz hey, girl’s gotta afford that Drizly delivery.

In 4 years I’ve started, Jesus Christ I have no idea how many scripts or ideas I’ve started, and I’ve finished 20 pages of one only because I had to submit it for my grad school app.

I did finish all of TED LASSO in one day though, so if any of those British soccer player actors are single, call me.

After an average of 6 hours of sleep, I start my days at 5am wondering if I would die in an earthquake and if I should freeze or just donate my eggs.

I still wake up at 5 or 6 am to read the new shitstorm of news: Covid, Trump, Triggering sexual assault story of the day, before spending another hour on my phone, going back to sleep and never not feeling exhausted. These days I still wonder about what my OBGYN sister told me years ago about freezing my eggs. She said, laughing, incredulous, as if it would NEVER HAPPEN: “If you’re 35 and have no prospects….”

Re donation - Pretty sure despite my good genes (good hair, no major health issues, great bowel movements) nobody even WANTS my eggs anymore. Except me. ¯\_(ツ)_/¯ So what else does society value that can I harvest from my body for money?

Mid January it will be 1,905 days since I last shaved my legs.

Quick – It's still been ___ days since I’ve shaved my legs. I literally have no idea. Add two more years to that. And I’m as fucking happy as can be with my unshaven legs. Even at the beach. Or anywhere else. I’m glad to feel like people really have embraced a more body positive outlook, and while we still have light years to go, I’m happy to do my part.

Still conflicted though about putting it on a dating profile and sifting out those who can't hang, dealbreaker? - or will this backfire and invite weirdos... Hey! maybe I'll get my stalker boyfriend after all! - or just tricking people into like me and then dropping the bomb. That really shouldn't be a bomb because it's just my body being natural, doing it's thang.

Oh AND I’ve gone “no poo”… which means I don’t use shampoo, and really I don’t wash my hair more than every 3 weeks, and I try to shower more than that usually, where are my boyfriends lining up? I’ve been sitting in my room with dried egg yolk and honey on my hair for at least 3 hours longer than you're supposed to. It is as hard as a helmet, and I’m pretty sure I’m gonna be pissed at myself when I finally do shower.

But we already knew that =)

---- Hey! Did you know you can subscribe to this blog? Me neither. Until like, a week ago. BUT. You can. Just enter your email address, or that of a person you hate, at the top of the page where it says SUBSCRIBE, and you'll get an email notification whenever I post a new blog! Joy! You can also find me on MEDIUM and help get me paid $$$ for writing! Don't ask me how I dont know. https://medium.com/@meginnola 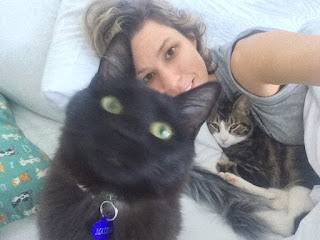