It is 28 days until my 33rd birthday. I've had sex with 49 guys, according to the list titled "Brahs" on my iPhone 5 (margin of error +3). I claim 5'9" and a half. I take 10mg of generic Prozac daily. I have 2 "foster" kittens that my roommate and I have had for over 6 months. We can't tell the foster people we want to adopt them yet because we can't afford their vet bills. I spoon them 7 nights a week, despite the fact I am allergic and they have infested our apartment with mites. I graduated high school at 17, graduated college at 21 with a 3.75 GPA, highest in the Poli Sci department. I've been in the film industry 9 years - 1 in Austin, 5 in New Orleans, 3 in LA. I make $13.25/hr getting lunch and coffee in a writers office. In 2 years I've started 6 pilot scripts and finished 1.5. After an average of 6 hours of sleep, I start my days at 5am wondering if I would die in an earthquake and if I should freeze or just donate my eggs. Mid January it will be 1,905 days since I last shaved my legs. So if we do the quick math... yes, I'm single.

I am a proud feminist, though by no means do I consider myself "radical," and I heartily embrace my Roxanne Gay termed "bad feminism." I'm far from perfect or a good example- Not in a "I reject intersectionality" way, more in a "I like shitty romcoms and to give blowjobs" type of way. Speaking of, my ex boyfriend will call this piece "navel gazey," (fair) and often describes my writing as "raunchy" or "gross" because I talk openly and intimately about sex in a comical way. Which I find neither "raunchy" nor "gross," instead an unfair characterization as he is the one to make eye rolling dick jokes and talks about poop and buttholes. He has the emotional intelligence of a gnat, and I'm still extremely hung up on him.
Lagniappe: Last time I slept over I unknowingly used a toothbrush he had used to clean cat pee out of his mattress. Then I fucked him, made him tell me he loved me, cried, and bought him lunch.

And this brings me to my story - the hypocritical standards for women, not the cat pee toothbrush. About 3 years ago, long before Rihanna stole my thunder on Instagram, I was thinking a lot about body hair, and the lopsided beauty standards we have for men and women.  I wondered... who is it that first told me that hair on my body was "disgusting?" Where did I get the idea that I should rid myself of it on a daily basis? That as a woman I am to be smooth and hairless in all of the places my hair naturally grows, because... that is what is beautiful? Socially acceptable at least. As determined by....

I started shaving my legs when I was 10. I made a deal with my mom that she would let me do it on the last day of 4th grade. And I couldn't. fucking. wait. Finally I'd be an adult. When the fateful day came, she had "forgotten" all about our arrangement. I asked her to help me, which she declined to do, seemingly annoyed. I was the youngest of three "spirited" children, so she was always seemingly annoyed. Rightfully so. She told me if I wanted to do it, I had to do it on my own.

I had read enough of my older sister's Seventeen magazines to get the gist, so I locked myself in the bathroom, covered my legs in overzealous amounts of thick, gagingly fruit scented shaving cream, and used the crappiest Schick "safety" razor you could give a child in the mid-90s. It was purple and the head was about 4 times the size of a normal razor.  It had thin bits of wire wrapped around the blades which made it impossible to cut yourself, slit your wrists or shave your legs. The next day at school I was outside on the track during recess, sporting some knee length wind shorts no doubt and my new semi-hairless calves, sure everyone would notice. No one noticed. At least, until we noticed boys.

Like all of my other painful efforts to fit in, this became my life for the next 19 years. Cutting my knees and ankles, obsessing over patches I missed on my thighs, agonizing about spikey new growth. What if some boy noticed and thought I was gross? What if some girl noticed and thought I was a freak? Then one day, I just stopped. Cold turkey. I was 29, living in Los Angeles, aka the capital of body shaming, but I was over it. Over feeling pressure to care what other people thought and over subscribing to some rule that I didn't even understand. At the time was dating a German guy, which people tend to highlight as a reason I was "able to get away with it," but the truth is he was just a good person, and he couldn't have given less of a fuck. Neither could I.

Friends and strangers were a different story. People are fascinatingly interested in your choices surrounding your own body hair removal. Even female friends I consider to be "enlightened" pushed back telling me it was gross or wrong. "Maybe just be feminist on the inside...."

Generally there are two things that happen when I tell someone I don't shave my legs: First, they will ask to see, to which I will oblige, happily pulling up my jeans or sticking my legs on the table. Margaret Elizabeth Class Dudley, as we have by now, long established.

Then, inevitably the conversation will progress like this:
Person asks me "Do you also not shave...Your armpits?"
"I do shave my armpits."
Person responds haughtily, patting themselves on the back. "Ah ha! Well that's not very feminist either! All of your arguments are therefore, debunked," they say, raising a finger. "You can't say you don't shave your legs for feminist reasons and then still shave your armpits."
"Yes I can. I can literally choose to shave, or not shave, anything I want to, on my own body, for whatever reason I want."
"Well what about... other things? Do you not shave... other things?"
Thank you, friend or strange person I just met for inquiring, I'm assuming by your eyebrow raising, whether or not I shave my vagina et al.
It's funny to me that people feel this is the natural progression of questioning. When I see a guy with a beard, I do not immediately ask, or assume, or really even fucking care, if he shaves his pubes. Besides, if he buys me a drink, I'll find out soon enough.

As I was once a blonde child, I admittedly have lighter leg hair than many people. This is something that is pointed out to me constantly during the interactions detailed above, and I'm told this qualifier gives me a "pass," which people use to justify my decisions in their heads. But to quote Shakespeare, "an unshaven leg by any other name would still have hair, so whats the fucking problem?" The problem is our society's larger rigidity to embrace self determination for women, their natural bodies, and god forbid, them doing something outside the norm. Even in this new culture climate we continue to hold them to some bogus standard that is yet another tool to make women feel bad about themselves. To put it lightly....

As the months progressed, I realized that not shaving my legs saved me SO MUCH TIME, effort, and money. Let's call a spade a spade, I'm a lazy person in general when it comes to appearance, and my legs are 34" long. Can you imagine how many hours, day, weeks! (probably not weeks) I've gotten back by not shaving my legs? So sure, eventually after the feminist rant and novelty became commonplace, it became a practical decision.

I've come within a hair of close to shaving a number of times. When I was going to be attending a pool party in Hollywood (hair flip) or an event wearing a short dress, I still felt nervous about people seeing my legs and judging me for it. I still do! But I've stuck to my guns, and gams, and in my attempts to normalize actually being normal, have hedged the urge to shave. So now on top of the feminism and practicality, after two failed relationships, a new apartment, a new career, and a job that is ending soon... it's really the only thing I've got going for me right now. Who knew that one day my biggest commitment would be to my hairy-ass limbs? And to debunking the system 😎 *Begins to sing HAIR in its entirety*

However, this now puts me face to face with a fun new challenge - dating as the girl with the unshaven legs. 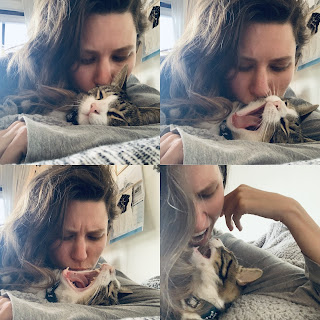